IRVINE, Calif. (April 11, 2016) – Coming off of a best-ever finish and qualifying effort, the two-car Mazda Prototype team is focused on the BUBBA burger Sports Car Grand Prix that takes the green flag at 4:05 Pacific Time Saturday afternoon as a part of the 42nd Toyota Grand Prix of Long Beach. While the first two races of the year were endurance contests of 12 and 24 hours, the Long Beach round is scheduled for 100 minutes – the shortest race of the year for the Prototype class in the IMSA WeatherTech Sports Car Championship. Long Beach is considered a home race for Mazda, as it is the closest event to the company’s North American headquarters in Irvine, Calif. Hundreds of Mazda employees will be in attendance for the race that can be seen on FOX Sports 2 (7:00 pm Eastern Time telecast) and the FOX Sports GO app.

The Long Beach race will feature the No. 70 Mazda Prototype (chassis number MM-08, if you’re scoring at home) piloted by Tom Long and Joel Miller, while the No. 55 Mazda (chassis MM-06) will be in the hands of Jonathan Bomarito and Tristan Nunez. This marks a home race for Miller and Bomarito, who are Southern California residents. Utilizing the power of the new Mazda MZ-2.0T racing engine, the Mazdas most recently qualified fifth and seventh at the 12 Hours of Sebring, and then survived the grueling endurance classic with sixth- and eighth-place finishes. 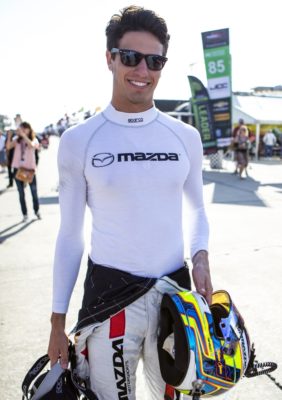 Nunez (seen left), the 20-year-old driver of the No. 55 Mazda, made an appearance March 28 at the 138th-annual White House Easter Egg Roll to help promote First Lady Michelle Obama’s “Let’s Move” initiative for children. This week, he will make a number of stops at area grade schools as a part of his Dnt Txt n drV Foundation outreach to teach the dangers of distracted driving. Nunez shared his thoughts about the upcoming race on the 11-turn, 1.968-mile course.

“It’s a completely different mindset for Long Beach,” Nunez explained. “This being a sprint race, qualifying becomes really important. There aren’t a lot of passing opportunities so if you can get a position at the front, you could be good for the whole race. That’s why getting a great qualifying pace is crucial. In the race, it’s going to be aggressive. If there’s an opportunity to pass, you gotta take it. You have to maximize every opportunity you get. It’s very different from the first two races of the year.

“Our car runs really well on a smooth track – places like Daytona and Mazda Raceway Laguna Seca,” Nunez explained, contrasting those circuits with the uneven surfaces of the Long Beach streets. “Now, when you put us on a street course with a lot of bumps, it cuts away the aerodynamics under the floor [of the car] and it’s a lot harder to drive. It will be a challenge, but with the new engine, we’re going to be competitive at every track we go to. I’m excited to see where we’ll stack-up to the competition on a street circuit.”

Mazda STEM Program To Make East Los Angeles and Long Beach Presentations
Mazda’s national-touring STEM (Science, Technology, Engineering and Math) program, called Racing Accelerates Creative Education (R.A.C.E.), will have multiple presentations Wednesday, April 13 in Southern California. The program was created to utilize the excitement of motorsports to educate students on the many career opportunities in the STEM disciplines, and has reached more than 24,000 students across the country.

From 8:55 to 11 AM, R.A.C.E. will be presented to Lakewood High School (4400 Briercrest Ave.) near Long Beach. That afternoon, in conjunction with the After-School All-Stars, the Mazda STEM program will be at Griffith Middle School (4765 E. 4th St) in East Los Angeles from 3:45 until 5:15 pm. Media are invited to attend either program.