History was made this past weekend when a pair of Mazda MX-5 Cup teams, preparing for the 2016 Idemitsu Mazda MX-5 Cup Presented by BFGoodrich® Tires, made a visit to an SCCA Club Racing weekend, and won.

This past weekend was the first club race in the SCCA Mid-Atlantic region since both Copeland Motorsports and MEATHEAD Racing had taken delivery of their new 2016 MX-5s.  Both teams came ready to test and to race.

Dean Copeland and Nikko Reger used the weekend as a major pre-season test. Copeland noted on Facebook that they “Made lots of big progress with setup and changes and feel [they] have a good handle on the cars! Look forward to getting back in these beauties!” 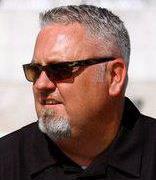 MEATHEAD Racing (Mike Collins pictured left) registered for multiple enduro and sprint racing classes, splitting up the driving duties to get as much data as possible. By running Mike Collins and Tim Jacobs in the No 75 car and Nick Bruni with Neil O’Rourke in the No 76 car, MEATHEAD Racing ran two different run groups during the test day. This enabled the team to run the race cars on track almost all day. In the end, the team logged over 400 miles on the first set of series BFGoodrich tires. One of the highlights of the test, according to Collins, was the tires: “We loved the tires right out of the box. They lasted forever. We could not have asked for anything better.” But the insight didn’t stop there.

“The day started off for us on Saturday with the hour-and-a-half enduro race; we shared driving duties with a five minute mandatory pit stop.  We kept using the track time to dial in the cars and to change drivers.  Just after the enduro finished, I raced in MXP, a new regional SCCA Class for the Global Cup cars that the SEDIV is using as a showcase for Spec Miata Drivers; we raced in the SM Run Group. Nick Bruni secured the pole. I started second and led every lap except the second to last lap. We had learned that the draft with these cars is incredible and you really didn’t want to be leading with one to go.  Nick passed me on the front straight and I think he knew he was being set up.  With age comes wisdom and knowing how to win. I followed Nick, used the draft, got past by him and led him to the line for the win by .18 seconds.

“As far as I know, our win in MXP at the SCCA VIR regional race this weekend was the first win for a new MX-5 Cup car in a sprint race. In the next run group, Dean Copeland won T3; Nikko Reger was second; and my co-driver Tim Jacobs rounded out the podium for a Mazda MX-5 Global Cup car sweep.”

We followed up with Collins regarding the balance and feel of the race car; he concluded: “The cars were great right out of the box. Very neutral to drive and everyone got up to speed very quickly. The trophy for the MXP race went to Glenn Long to be hung on his wall.  Long Road Racing sent three different technicians to assist us and the other teams this weekend with any teething problems and to check on the cars. We can’t wait for the MX-5 Cup Series to get started.”

At least 40 racers will be looking to add their name into MX-5 history to become the first ever winner in the 2016 MX-5 Cup.  We’ll know that answer on April 29.