IRVINE, Calif. (January 8, 2016) –  The two-car Mazda Prototype race team will be powered by the new gasoline-fueled MZ-2.0T engine this season in the IMSA WeatherTech SportsCar Championship. The engine has been in development for much of the past year and has completed nearly 4,000 test miles prior to this weekend’s “ROAR before the 24” test session at the Daytona International Speedway.

The MZ-2.0T earned its name from its configuration: “MZ” refers to Mazda, “2.0” references its 2-liter capacity, while “T” is a nod to the turbocharger. The inline, four-cylinder engine is built upon a similar foundation of the MZR-R engine that was developed by Mazda and Advanced Engine Research Ltd. (AER) for sports car racing beginning in 2006. In addition to the new Prototype engine, Mazda works with AER on the current version of the MZR-R engine that powers the entire field in the Indy Lights series, the top rung of the Mazda Road to Indy. 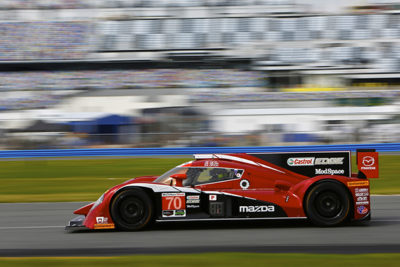 “We gained immense knowledge from three years of racing a stock-block diesel engine. That knowledge will improve the next generation of Mazda diesel engines. But, with the impending rules changes in 2017 [which will not allow a diesel-fueled option], a purpose-built racing engine was our best choice to reach our long-term goals and contend for race wins and championships. After extensive testing, the MZ-2.0T is not only very fast, but reliable as well. There was no off-season for this team, as they’ve worked incredibly hard to prepare for the season. Mazda loves to race, and we couldn’t be more optimistic about the prospect of this engine and our team.”

Jonathan Bomarito, Driver, Mazda Prototype team
“The drivability of the engine is incredible. The first thing you notice is how smooth the power is delivered in every gear through the RPM range. There is great low-end torque with zero turbo-lag, which is very impressive. All race tracks are different and the gearing is never perfect for every corner, so having an engine where you can short-shift or stretch a gear longer is very important. The MZ-2.0T does this easily.”

Marcus Shen, Chief Engineer, Mazda Prototype team
“This engine has transformed everything for us. Obviously, it’s more powerful so we’re going faster. Once you go faster, the aerodynamics work very differently – we have much more downforce – and the chassis works better. It’s not just straightaway speed, the engine has improved every aspect of our overall performance.

“A gasoline, direct-injected engine – like many of the Mazda passenger cars – helps with the horsepower and throttle response and yet still produces great fuel economy. When the driver puts the pedal down, it goes. It’s creating roughly 285 horsepower per liter, which is much higher than the estimated 110 horsepower per liter of the 5.5-liter V8 Daytona Prototype engines.”
The Mazda Prototype team features two entries: the No. 55 car (numbered in honor of the 25th anniversary of Mazda’s Le Mans victory) with drivers Jonathan Bomarito and Tristan Nunez, and the No. 70 car with Joel Miller and Tom Long driving. For the Rolex 24, current Indy Lights champion Spencer Pigot will join the No. 55 team, while Ben Devlin will return to the team to drive the No. 70. 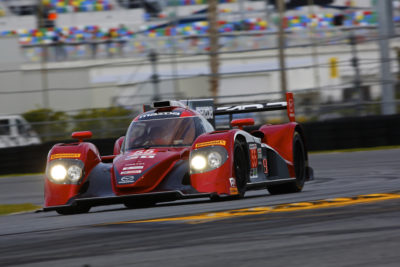 Mazda Motorsports
Mazda Motorsports boasts the most comprehensive auto racing development ladder system of any auto manufacturer in the world. The Mazda Road to 24 program offers a number of scholarships to advance drivers up the sports car racing ladder which culminates in the Mazda Prototype team that races in the top level of IMSA sports car racing in North America. The Mazda Road to Indy is a similar system in open-wheel racing, which includes USF2000, Pro Mazda and Indy Lights racing categories with Mazda power. The new MX-5 Cup car makes its debut in 2016, with affordable, turnkey race cars available direct from Mazda. In the grassroots categories, more Mazdas road race on any given weekend in North America than any other manufacturer.

Mazda North American Operations is headquartered in Irvine, Calif., and oversees the sales, marketing, parts and customer service support of Mazda vehicles in the United States and Mexico through nearly 700 dealers. Operations in Mexico are managed by Mazda Motor de Mexico in Mexico City. For more information on Mazda vehicles, including photography and B-roll, please visit the online Mazda media center at www.mazdausamedia.com