From mini bikes in the backyard, through karting classes, to multiple classes in the Sports Car Club of America (SCCA), then Cooper Tires USF2000 Championship Powered by Mazda, Andrew List has been driving something as fast as he can, for as long as he can remember. Next up: The 2016 Idemitsu MX-5 Cup.

List began his racing career after a trip to a local go-kart track when he was seven and has been hooked ever since. At 22, List’s racing career spans more than a decade and a half and boasts multiple karting and SCCA championships, as well as professional awards such as the Tilton Hard Charger award for the 2014 USF2000 series. “I just love motorsports.  It’s one of the most competitive sports out there, both on and off the track,” List explained.

When he’s not at the race track, List is involved in two programs that help young drivers develop the skills to remain safe in emergency situations.  As an instructor at the Teen Accident Avoidance and Car Control Class sponsored by the Rotary Club in Monticello, MN and the Morrie’s Auto Group and Brainerd International Raceway, Advanced Defensive Driving Course for Teens in Minneapolis, List spends time with young drivers to foster their skills.
“Each year too many young drivers die or are seriously injured in car crashes. These courses help young drivers develop the skills to maintain control in emergency situations.  Watching these young drivers improve in just one day is nothing less than amazing,” observed List.  “They begin the day pretty nervous, but by the afternoon they’re putting their new skills to the test and demonstrating newfound confidence in themselves.” (Which gives us confidence in the impact of motorsport.)

In 2016 List and Dare to Dream Motorsports will participate in the Mazda MX-5 Cup. “We’ve raced in the Mazda Road to Indy for the last two years, another series that’s partnered with Mazda,” said List. It seemed natural to continue to participate with a great partner like Mazda, especially in a series as competitive as the MX-5 Cup,” said List. 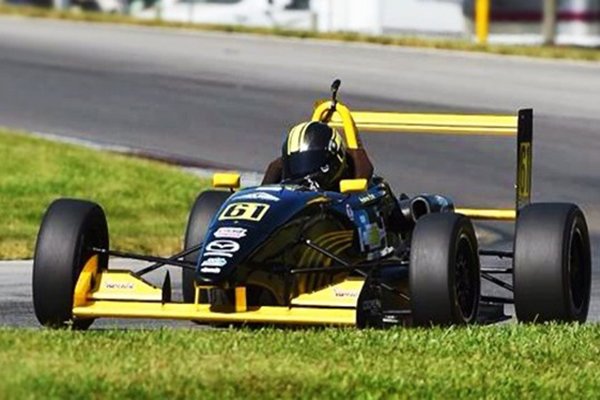 The Mazda MX-5 Cup is a series based on competition between identically prepared cars. “Mazda has invested a lot of time and resources to create an awesome platform for competition and for young drivers in the sport,” List explained.  “Its research and testing has created a car that’s easy to tune and fun to drive.  I’m excited to continue working with Mazda because its team knows how to create a highly competitive series.  Mazda’s MX-5 Cup and the Mazda Road to 24 are great examples of its commitment to grassroots racing and driver development, and I can’t wait to be a part of it.”

2014: Finished 17th in his rookie season of the Cooper Tires USF2000 Championship Powered by Mazda with one top-10 finish; earned the Tilton Hard Charger Award for improving 54 places during 14 races.