John Dean II is a lifelong racer, father, and owner of Sick Sideways Racing. In October 2015, he added Mazda Motorsports scholarship driver to the list.

Have you considered the attributes that make you a great driver? Dean has many, but as we have gotten to know him, we can hone in on: very analytical; advanced knowledge of vehicle dynamics; and passion for motorsports. These attributes have led to his success as a driver and coach. Dean is known for his ability to drive any car and immediately push it to its limits – key for being a test driver, a driver coach, and a top-tier professional driver.

As a young child, Dean wanted to follow in his father’s footsteps and drive race cars. In 1990, he began racing go karts on local dirt ovals in Florida, realizing his love for racing. In 1998 his sports car racing career began with his first race car, a BMW, running track day events. Shortly thereafter, he began club racing. In 2003 and 2004, Dean took back-to-back regional championships in an ITA prepared BMW in SCCA. He later went on to instruct with Skip Barber Racing School, and became an exhibition drifter and test driver.

In 2012, Dean made his way to the professional racing circuit in the Idemitsu MX-5 Cup presented by BFGoodrich® Tires after signing a three year sponsorship agreement with Projections Research, a pharmaceutical research company. Since then, Dean has made a name for himself in MX-5 Cup. Dean is the winningest driver in the series and has been on the podium more times than any other driver, holding many of the track records. He has the record for most poles and has finished four of four championships in the top three, including his 2015 championship win in the MX-5 Cup. What we think could be more impressive than these accolades… John’s two Sick Sideways teammates in 2015 MX-5 Cup – Nathanial Sparks and Drake Kemper – finished 3rd and 4th, respectively, in the championship.

Since building his company into a top-tier race team is a goal of Dean’s, we feel confident saying he has gotten there. The question becomes, “Where does Dean go from here?” Well, we asked him. “My goals remain the same for 2016: Sick Sideways to win the MX-5 Cup championship; have all our team members achieve or exceed their personal goals; continuously improve upon our core competencies to provide the value our partners seek; and finally, build Sick Sideways into a well-known Mazda racing team across multiple series,” replied Dean.

As he continues building his company, he is also working to compete in the 12 Hours of Sebring. Dean’s father John Dean, Sr. is known as “The Voice of Sebring” for his 21 years announcing the 12 Hour race in Sebring. When Dean, one day, competes at this event, it will hold a special place in his heart for himself and for his family (and for us at Mazda Motorsports, as we have gotten to know, respect and appreciate John Dean – father, Mazda champion, and team owner). 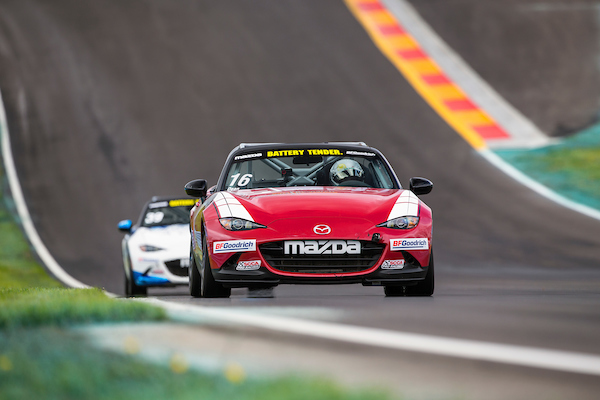