Nico Jamin practically had the Cooper Tires USF2000 Championship Powered by Mazda wrapped up before the Mazda Road to Indy finale at Mazda Raceway Laguna Seca. But for good measure, he went out and won both races of the doubleheader anyway.

Jamin had enough of a points lead that the title was fairly secure. By finishing well in both races, he would be champion and claim the Mazda scholarship valued at more than $380,000 to move up to the Pro Mazda Championship Presented by Cooper Tires in 2016. However, it was apparently much more satisfying to claim his ninth and 10th victories of the season. The final race on Sunday was also the sixth in a row in which he claimed maximum points – a total of 33 for the win and the bonus points for pole position, most laps led and the fastest race lap. 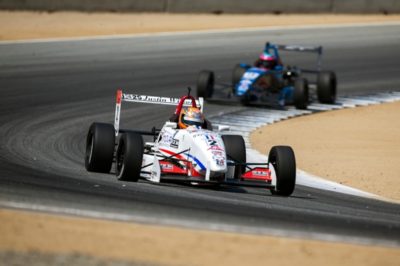 The Cape Motorsports with Wayne Taylor Racing driver from Rouen, France, started by winning Saturday’s race from the pole – and breaking Sage Karam’s pole record in the process. He also broke the record for most podiums in a season, previously held by JR Hildebrand at 14.

On Sunday afternoon in the final race of a championship weekend that saw not only the deciding battles of the Mazda Road to Indy series but also the Pirelli World Challenge Championships, Jamin maintained his extraordinary run of success by dominating the second round of the Cooper Tires USF2000 Grand Prix Powered by Mazda. Teammate Aaron Telitz finished a lonely second, well clear of Pabst Racing’s Eidson, who worked his way up from fifth on the opening lap. It was the eighth time in 16 races the trio had shared in the podium ceremonies.

Jamin immediately jumped clear at the start and controlled the pace of the 21-lap race before taking the checkered flag 8.4066 seconds clear of Telitz. Martin made a fine getaway to briefly challenge the two leaders into Turn 2 before settling into third place, which he held until sliding off the track on the exit of Turn 6 on Lap 4. The incident dropped him to fifth, behind fellow Australian Luke Gabin (Team Pelfrey) and Eidson, who had found himself shuffled down two positions at the start.

Gabin’s misfortunes continued when his car developed a misfire, causing him to make a visit to the pits and costing any chance of a strong finish.
Eidson thereby took over in third, chased by the recovering Martin and Los Angeles-based Russian Nikita Lastochkin, who followed up a fine effort on Saturday with an even better performance on Sunday. Lastochkin closed steadily on Martin in the closing stages en route to a season-best fifth-place finish.

The Cape brothers, Dominic and Nicholas, claimed their ninth PFC Award as the winning team owners, while the Staubli Award went to Peter Portante, who finished 10th in his first open-wheel race of the season at the wheel of another ArmsUp Motorsports Van Diemen-Mazda.