The opening event of NASA Championship Sunday at VIR was the 42-car Spec Miata race. Double qualifying race winner and polesitter Blake Clements led the field to the green. A first-turn, first-lap melee cost top runner Danny Steyn, as he retired with car damage and the race went immediately yellow.

On the restart on lap three, Clements continued to lead until another caution flew on lap five. On lap seven the race went green with Marc Cefalo driving his Miata to the front. On lap nine Clements went back to the point with Hernan Palermo taking the lead one lap later. On lap 11, NASA Western States Spec Miata Champion, Mark Drennan, took the lead before sliding back to third with Clements in the lead.

On the final lap, Clements got pushed wide in the last turn as three Miata racers came to the checker side-by-side for the win. It was Palermo taking the win on track, followed by Drennan and Jonathan Davis squeaking into third.

Palermo’s celebration was cut short, however, as he was disqualified for contact after post-race review. That left Drennan as the champion, Davis second and Clements completing the podium in third. Brian Henderson was awarded Hard Charger after going from 36th starting position to finish fifth.

With the win, Mark Drennan does the double, winning both the Eastern States and Western States Spec Miata NASA Championships for 2015. The win also makes Drennan eligible for the Mazda Road to 24 Shootout and the $100,000 prize toward driving in the 2016 Battery Tender® Mazda MX-5 Cup.

In PTE Jason Kohler drove his No. 848 Mazda Miata to the class win. He was able to make his move to the front on the second lap, thanks in part to the long VIR track favoring his Miata, he noted. Kohler also took the trophy in Time Trial E in the same Miata. 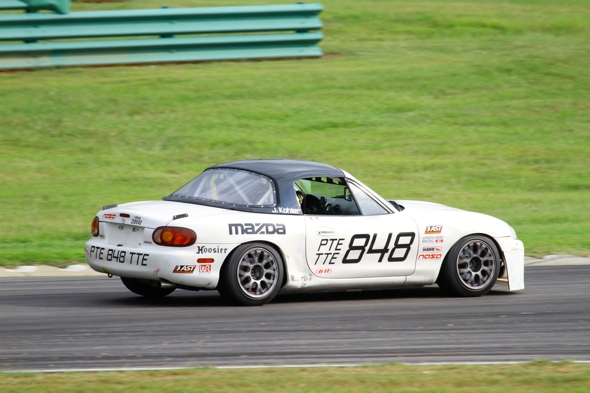