Nico Jamin is on a roll. The 19-year-old Frenchman swept all three races that comprised the Allied Building Products Grand Prix of Mid-Ohio, Rounds 12, 13 and 14 of the 16-race Cooper Tires USF2000 Championship Powered by Mazda. In the process, he became the first driver to sweep all three legs of a triple-header since the formation of the Mazda Road to Indy ladder in 2010 and put himself solidly in charge of the points battle. 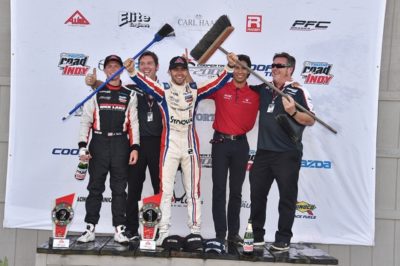 Jamin executed three flawless performances, making each win look easy, with the last being perhaps the most dominant. In Round 14, the third race of the weekend, Jamin improved the fastest lap of the race on every tour except one (when he missed the mark by just 0.05sec) to lead the field by more than 6.5 seconds before a late-race caution negated his advantage. Once again he had no problems at the restart, jumping clear of teammate Telitz, who had out-fumbled old adversary Eidson at the first corner for second. Remarkably, Jamin, Telitz and Eidson shared the podium for the seventh time in 14 races this year.

Anthony Martin rebounded from a disappointment morning race to finish hot on Eidson’s heels in fourth, chased by Parker Thompson, who earned his second RePlay XD Move of the Race Award of the day for another aggressive start that saw him gain three positions within the first few corners.

The final two rounds of the Cooper Tires USF2000 Championship Powered by Mazda will take place at Mazda Raceway Laguna Seca, in Monterey, Calif., on Sept. 11-13, where the final outcome of the MAZDASPEED Scholarship, to assist in graduation to the next step on the Mazda Road to Indy, the Pro Mazda Championship Presented by Cooper Tires in 2016, will be determined.