McCumbee brought home the first win for the first-year team of which he is a co-owner, with former series Champion Stevan McAleer, in a race that featured four full-course yellow flag periods. Eight of the 20 laps were run behind the pace car in a race that was slowed to an average speed of 73.933 mph around the 10-turn, 2.459-mile circuit.

McCumbee stared in sixth and was able to improve one position after Dean Copeland stalled on the grid. During the only lengthy stretch of green-flag racing, McCumbee worked his way up to fourth, then inherited third place after Patrick Gallagher suffered a left-front suspension failure on lap 12.

McCumbee found himself behind the three Sick Sideways teammates who were attempting to drive away from the field. On lap 13, then-leader John Dean pulled off to the side of the track before Turn 8. That created quite a shuffle up front, which allowed McCumbee to drive to the lead in his No. 29 ModSpace MX-5. From there, McCumbee held off the rest of the field until the race was called seven minutes early following a Turn 3 wreck that required more time for cleanup than there was time remaining in the race. 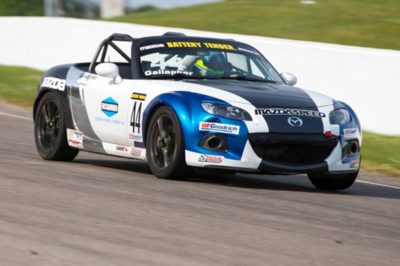 In the second race of the weekend, Round 8, Gallagher, of Thornville, Ohio, scored his second career MX-5 Cup win. Nathanial Sparks, of Spanish Fort, Alabama, crossed the line second, followed by Portante.

In contrast to Round 7, the race was slowed only once, with four laps under the full-course yellow flag. In his No. 44 Howard Concrete Pumping MX-5, Gallagher kept himself within the top three positions throughout the entire 25-lap event. On Lap 23, he pounced by making the pass for the lead on Copeland stick.

In the Skip Barber MAZDASPEED Pro Challenge, Ben Albano, of Greenwich, Connecticut, guided his No. 61 Project Yellow Light/Manfredi Jewels SBMX-5 to a pair of victories in Canada.

Dean leaves Canada with the Idemitsu Mazda MX-5 Cup Championship lead with 370 points. Gallagher trails by only 12 markers in the drivers’ standings, while Kemper sits third with 336 points.

The next stop for the SCCA Pro Racing Idemitsu Mazda MX-5 Cup Presented by BFGoodrich® Tires will be Road America, Aug. 27-29, as part of the NASCAR XFINITY Series race weekend.