Spencer Pigot takes one dry and one wet victory in Toronto doubleheader as Jack Harvey continues to lead the points.

Spencer Pigot won his third and fourth Indy Lights Presented by Cooper Tires races of the season to re-enter the championship fray after a difficult May in Indy. Pigot, the reigning Pro Mazda Championship Presented by Cooper Tires champion, started third and made an impressive pass on current points leader Jack Harvey on lap 7 to regain the position that would turn out to be critical after a scary crash involving Nelson Piquet Jr. and RC Enerson as they fought for the lead. 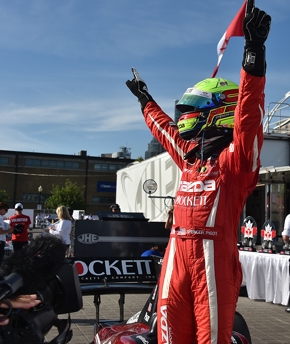 As the field streamed towards Turn 1, outside front row starter RC Enerson made a move to the outside of polesitter Nelson Piquet, Jr. who had been hit from behind by Pigot. The two front-row starters were joined by fifth-place qualifier Felix Serralles, who made it three-wide going into the 90-degree right-hand turn.

Serralles was squeezed at the exit of Turn 1 and clipped the wall with his left side. The track went yellow for an incident involving Juan Piedrahita and Serralles was able to limp his damaged machine to the pits, where the Belardi Auto Racing crew replaced his front wing and front left wheel.

When the green flag flew again on Lap 4, it was Indy Lights rookie Enerson stalking Formula 1 veteran Piquet Jr., of Carlin, who made an impressive Indy Lights debut to qualify on pole. For the next 10 laps the gap between the two drivers was never greater than 0.8sec.

On Lap 14, Enerson made a move to the inside of Piquet down the long back straight, and then made a move back to the outside where his front right wheel made contact with the left rear of Piquet.  The No. 7 became airborne with the floor and nose of the car making contact with the catch fence before sliding upside down through the Turn 3 runoff and coming to rest after contacting two sets of tire barriers.

Thankfully, Enerson was not injured. He was helped from the car by the Holmatro Safety Team and waved to the crowd as he walked to the medical vehicle under his own power. He was later checked and released by the INDYCAR medical staff.

The 35-lap event was red-flagged on Lap 17 so the track crews could repair the damage to the circuit. When the field went back to green on Lap 19, the top three were Pigot, Harvey and Ed Jones of Carlin. Serralles was able to force Jones into a mistake at the braking point of Turn 3 to earn the final spot on the podium; however, the No. 5 of Serralles was later disqualified after failing post-race inspection, giving Pigot’s teammate Kyle Kaiser his first Indy Lights podium.

On Sunday, Pigot survived a race under challenging conditions to make a clean sweep of the doubleheader weekend on the streets of Toronto. The win for the 21-year-old was also his 22nd career trip to the top step of a Mazda Road To Indy podium.

The rain and challenging conditions left only three drivers on the lead lap by the end.

Polesitter Pigot led the field to the green flag, but the first attempt to go racing on the 1.755-mile, 11-turn Exhibition Place circuit was waved off when fellow front row starter Jones spun coming to the green flag. The 20-year-old pilot was able to keep going but sustained minor damage to his front wing after making light contact with the wall. The native of the UAE also had contact with Piedrahita in Turn 8 later in the race, but the Carlin Racing crew was able to quickly replace damaged front wings in both instances and Jones was able to stay on the lead lap to come home third for his fifth podium of the season.

Championship leader Harvey drove a smart race to earn his 18th career Indy Lights podium. The Schmidt Peterson driver started fifth and made one of the nicer passes of the race on Lap 2 when he went under Piquet Jr in Turn 3.  However, he had nothing for Pigot as he could get no closer than 1.7 seconds in the closing laps.

Despite losing two laps after contact with Jones, Belardi Auto Racing’s Piedrahita was able to fight back to a fourth-place finish and score a career-best result.

After the horrific crash in Saturday’s race, Enerson’s Schmidt Peterson crew were hard at work until 3 a.m. rebuilding the Lucas Oil sponsored No. 7 entry. The 18-year-old started third and moved to second when Jones spun on the first lap. The New Port Richey, Florida driver was impressively hounding Pigot until he spun coming to the green flag on the first restart on Lap 8. His team was able to make repairs and Enerson crossed the line in fifth.

The race was originally scheduled for 45-laps or 60-minutes but was shortened to 30 laps when the weather began to worsen.