Drivers from as many as 15 different nations will be vying for honors over the weekend, although most eyes are likely to be focused on ex-Formula 1 driver Nelson Piquet Jr., who will be making his Indy Lights debut in place of fellow ex-F1 racer Max Chilton as he races at Le Mans.

Englishman Harvey Leads the Way in Indy Lights
The Indy Lights title chase is finely poised at the halfway stage in the 16-race season. Second-year contender Jack Harvey, from Lincoln, England, has rocketed to the top of the points standings on the heels of two wins from the last three races for Schmidt Peterson Motorsports with Curb-Agajanian. Harvey currently leads fellow Briton Ed Jones (Carlin) by 13 markers, 192-179, with American hope Spencer Pigot (Juncos Racing) a further 11 points in arrears. At stake is a scholarship which will include a guaranteed entry in three Verizon IndyCar Series races in 2016, including the 100th Indianapolis 500.

Harvey, 22, finished tied on points last year with Gabby Chaves, only to lose the title on a tie-breaker of second-place finishes. He is already a proven winner after claiming the 2012 Cooper Tires British Formula 3 Championship. Harvey also finished fifth and was the top rookie in the 2013 GP3 Series.

Jones, 20, burst onto the North American scene earlier this year with three consecutive victories for the accomplished Carlin team, which has won multiple championships in a variety of European disciplines over the past two decades.

While Jones’s regular teammate Max Chilton, who raced in Formula 1 with the Marussia Manor team both in 2013 and 2014, is racing this weekend in the 24 Hours of Le Mans, his seat will be filled by fellow ex-F1 racer – and son of a three-time F1 world champion – Nelson Piquet Jr. The younger Piquet has amassed an impressive resume of his own and currently leads the innovative new all-electric FIA Formula E Championship with only two races remaining.

The Cooper Tires Grand Prix of Toronto Powered by Mazda will comprise two races. The green flag for the 60-minute “feature” event is scheduled to fly at 11:45 p.m. on Sunday, June 14, immediately prior to the Verizon IndyCar Series headline event.

Sunday’s race will feature same-day coverage on NBCSN at 2 p.m. EDT. Live timing and commentary for all sessions will be available on the new Mazda Road to Indy App and at indylights.com with full coverage on the IMS Radio Network to Sirius XM Satellite Radio, indycar.com, indycarradio.com and the INDYCAR App from Verizon. 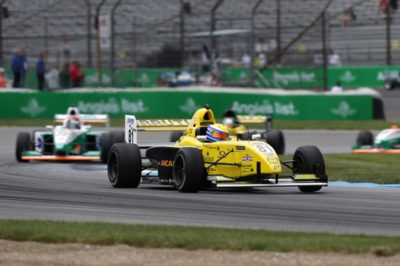 Drivers from eight different countries are set to do battle in the ninth and 10th rounds of the 16-race Pro Mazda Championship Presented by Cooper Tires. Uruguayan rookie Santi Urrutia (Team Pelfrey) and second-year American Neil Alberico (Cape Motorsports with Wayne Taylor Racing) currently lead the pack, separated by just eight points prior to the Cooper Tires Grand Prix of Toronto, but among their challengers will be three Canadians who are all capable of winning.

Garett Grist, 20, from nearby Grimsby, Ont., won two races last year but is still seeking his first victory in 2015 after joining the defending champion team, Juncos Racing. Dalton Kellett (Andretti Autosport) also hails from the Toronto area, Stouffville, and, after recently completing his studies at Queen’s University in Kingston with an Engineering Physics Degree, is keen to build upon the promise of a front-row qualifying position in the most recent race at Lucas Oil Raceway. The third Canadian on deck is rookie Daniel Burkett (Cape Motorsports), from Winnipeg, Man., who has a podium finish to his name after stepping up this year from USF2000.

Malaysian Weiron Tan (Andretti Autosport) and Frenchman Timothé Buret (Juncos Racing) also are among a strong rookie contingent, and currently hold third and fourth positions in the point standings. Tan has won three races, including a dominant performance on the Lucas Oil Raceway oval, while Buret has four podium finishes to his name in addition to a win on the Indianapolis Grand Prix circuit.

Fellow Frenchman and Pro Mazda rookie Florian Latorre (Cape Motorsports) also should be a contender after claiming two poles and one race win last year in Toronto en route to the USF2000 championship title and a MAZDASPEED scholarship. The first race of the Cooper Tires Pro Mazda Grand Prix of Toronto will start at 1:35 p.m. on Saturday. Race Two will start at 10:00 a.m. on Sunday. Live timing and commentary for all sessions will be available on the new Mazda Road to Indy App and at promazda.com.

Frenchman Jamin on a Roll in USF2000 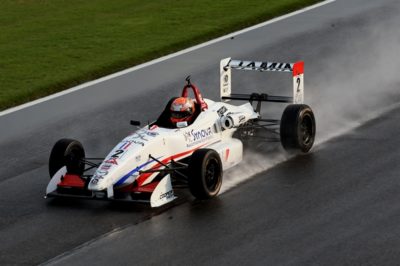 Nico Jamin has every intention of becoming the second Frenchman in as many years to win the Cooper Tires USF2000 Championship Powered by Mazda and a MAZDASPEED scholarship to ensure graduation to Pro Mazda for 2016. The 19-year-old from Rouen, France, seeks to follow in the footsteps of 2014 champion Florian Latorre, and had begun to distance himself from the pack on the heels of three consecutive wins for Cape Motorsports with Wayne Taylor Racing.

Last time out, though, on the Lucas Oil Raceway oval, Jamin had to give best to Jake Eidson, who scored his third victory of the season for Pabst Racing. Eidson, 20, from Littleton, Colo., has fond memories of Toronto after earning his first USF2000 win there one year ago.

Fellow American Aaron Telitz, from Birchwood, Wis., remains in the thick of the championship fight, only 30 points behind Jamin, his Cape Motorsports teammate, and also has good prior experience of the Exhibition Place street circuit after claiming a podium finish in 2014.

This weekend’s Allied Building Products Grand Prix of Toronto features two races; the green flag for the first 30-minute race will fly at 12:40 p.m. Race Two on Sunday, June 14, will start at 9:00 a.m. Live timing and commentary for all sessions will be available on the new Mazda Road to Indy App and at usf2000.com.