Oval Thriller at Lucas Oil Raceway in Indianapolis is dominated by Weiron Tan with Will Owen second.

The  thrilling Cooper Tires Freedom 90, Round Nine of the Pro Mazda Championship Presented by Cooper Tires, provided a rousing climax to the traditional 70th “Day (Night) Before the 500” at Lucas Oil Raceway. Malaysian Weiron Tan led every inch of the 90-lap race around the 0.686-mile oval in front of an appreciative crowd in perfect weather  conditions, but his eventual margin of victory was a mere 0.4261 seconds over American Will Owen (Juncos Racing). It was the third win in succession at Lucas Oil Raceway for Andretti Autosport.

Neil Alberico fought his way from sixth on the opening lap to third for Cape Motorsports with Wayne Taylor Racing. With the result the Californian thereby closed to within eight points of championship leader Santi Urrutia (Team Pelfrey), whose day ended early after clipping the Turn 3 wall. 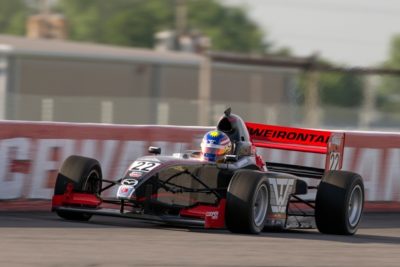 Tan, who qualified on the pole for the fifth time this season, took off into the lead at the start like a scalded cat. Teammate Dalton Kellett tucked into second place, only for his car to snap sideways between Turns 3 and 4 on the opening lap. The Canadian did well to maintain control, but not before losing several positions.

Owen took advantage of Kellett’s slide to sneak past Florian Latorre (Cape Motorsports) for second, while fellow Canadian Daniel Burkett squeezed ahead of Cape teammate Alberico in fourth. Garett Grist (Juncos Racing) ran sixth ahead of the unfortunate Kellett, who was later involved in an incident with Timothe Buret (Juncos Racing) in Turn 3 on Lap 28. Raoul Owens (Team Pelfrey) also was caught up in the skirmish.
Tan’s commanding five-second lead was erased by the ensuing full-course caution, although the 20-year-old Malaysian quickly reestablished his advantage over Owen at the restart.

Instead, all eyes were on the battle for third between Latorre and Alberico, who had earlier found a way past Burkett. The pair battled side-by-side for lap upon lap before Alberico finally made the pass stick on Lap 63, earning himself the RePlay XD Move of the Race Award. Alberico soon pulled clear, leaving his teammate to come into the clutches of Grist, Victor Franzoni (M1 Racing) and Jose Gutierrez (Juncos Racing).

As Latorre and Franzoni faded in the late stages, teammates Grist and Gutierrez became embroiled in a tense battle for fourth. In the meantime, race leader Tan was looming closer in their mirrors, and the second-placed car of Owen began to inch closer to the leader.

A thrilling final few laps ended with Grist, who had won the corresponding event last year, just holding onto fourth ahead of Gutierrez, who earned the Quartermaster Hard Charger Award for advancing six positions over his grid placing. Owen, meanwhile, closed right up onto Tan’s tail but was unable to make a challenge for the lead and had to settle for second – for the second race in a row.

The Pro Mazda Championship Presented by Cooper Tires will continue with a double-header event on the streets of Toronto, Ont., Canada on June 12-14.