Day before the 500 race at Lucas Oil Raceway was dominated by Pabst Racing star after he took the lead from his second-place starting position. 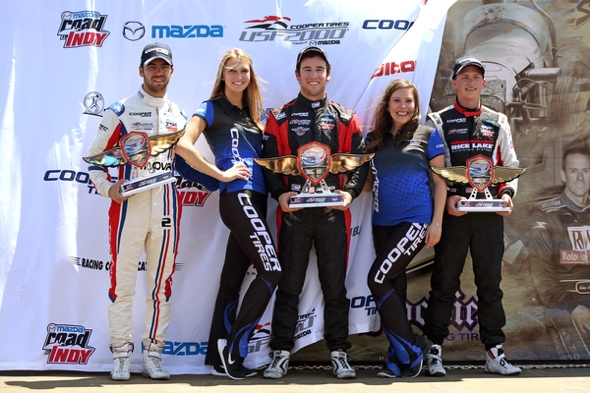 The story of the Mazda Freedom 75 at Lucas Oil Raceway at Indianapolis, part of the #MRTI FreedomFest and the lead-up to the Memorial Day weekend’s 99th Indianapolis 500, was all about the start. Jake Eidson (Pabst Racing) jumped pole-winning championship leader Nico Jamin into Turn 1 on the 0.686-mile oval  en route to his third victory of the season – his first since sweeping the opening double-header of the Cooper Tires USF2000 Championship Powered by Mazda on the streets of St. Petersburg.

Jamin and Cape Motorsports with Wayne Taylor Racing teammate Aaron Telitz completed the podium, for the fifth time in nine races this season. Jamin still leads the championship points chase by a margin of 233-218 over Eidson with nine of 16 races completed.

Jamin, from Rouen, France, qualified on pole for the fifth successive race, but Eidson made a better jump as the green flag waved and was able to lead the field into Turn 1. Telitz followed in third, while Australian rookie Anthony Martin (John Cummiskey Racing) managed to sneak past Eidson’s teammate Yufeng Luo for fourth. 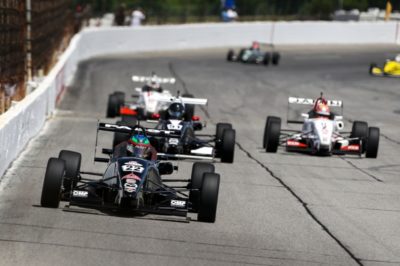 The top five positions never changed throughout the all-green 75-lap race but it certainly wasn’t for a lack of trying. Jamin kept the pressure on throughout. Eidson, though, was remarkably consistent, circulating in the-low 22-second bracket, and he was flawless while overtaking lapped cars. The top two were separated by just 0.5834 at the checkered flag. Telitz had a little more trouble with traffic in the closing stages but still took a clear third.

The top three pulled well clear of their pursuers. Martin and Luo were rarely separated by more than the length of a Van Diemen-Mazda until they were obliged to work their way through some slower cars in the final stages, when Martin finally made a slight break and was able to edge out a margin of almost two seconds. Luo’s fine run represented his second straight top-five result.

Keyvan Andres Soori finished seventh for ArmsUp Motorsports, also one lap down, despite having to start at the back after his car failed to start on the grid. The 15-year-old German also claimed the Tilton Hard Charger Award, the Staubli Award and the RePlay XD Move of the Race Award for his impressive pass of Garth Rickards (Team Pelfrey). The PFC Award went to Augie Pabst III as the winning car owner.

Next up for the Cooper Tires USF2000 Championship Powered by Mazda will be a doubleheader weekend on the streets of Toronto, Ont., Canada, in support of the Verizon IndyCar Series on June 12-14.