Mazda has been in business since 1920, while the Indianapolis Motor Speedway began hosting events in 1909, and this week features a series of firsts for the venerable auto maker at the world-famous track. The Freedom 100 for the Indy Lights Presented by Cooper Tire will take the green flag Friday afternoon, May 22, marking the first time Mazda engines have competed on the 2.5-mile oval at the Speedway. The 40-lap race will also be the first-ever oval race for the series’ new Dallara IL-15 chassis. The race will be televised live at 12:30 ET Friday on the NBC Sports Network.

Mazda Power
Mazda MZR-R engines will power the entire Indy Lights field. The engine is a 2.0-liter turbocharged power plant originally developed by Mazda and Advanced Engine Research (AER) for sports car racing and has been adapted for the sleek open-wheel Indy Lights cars. The engine produces 450hp, and is capable of completing an entire race season without requiring a rebuild.

Scholarship Winner on the Mazda Road to Indy
The Indy Lights series is the top rung of the Mazda Road to Indy program, which supports drivers on the way up to the top levels of open-wheel racing.
Spencer Pigot, a 21-year old California native, earned the Mazda Indy Lights driver scholarship for 2015 by winning the Pro Mazda championship last year. Pigot has two race wins this season in the No. 12 Mazda for Juncos Racing, and sits a close third in the point standings entering the Freedom 100. Like all Mazda scholarship drivers, Pigot’s car is painted Mazda’s Soul Red color.

“It’s really a race of firsts,” said Pigot. “The first oval race for Mazda at the Speedway, the first oval race for the Dallara IL-15 chassis, and the first race for me on the Indianapolis Motor Speedway oval. It’s an exciting time. It’s the greatest track in the world, and I’ve felt that way for as long as I can remember. For me to be able to race on the oval is amazing.”

Testing speeds for the new car/engine combination have easily been faster than previous lap records, increasing anticipation for the race.
“I think it will be a great race,” explained Pigot. “There have been some really good Indy Lights finishes here in the past few years, and this new car really drafts well. All of the drivers who haven’t raced at the Speedway did a test in Chicago (I think there were nine of us), and it was a lot of fun. We all ran close together to make sure the officials could watch us and see that we wouldn’t do anything crazy!” 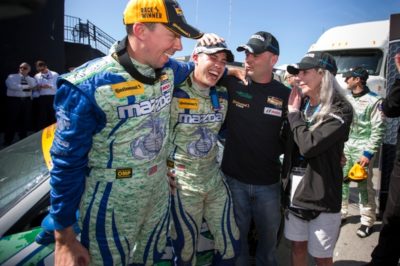 Marine Staff Sgt. Liam Dwyer will give the command Friday to “start your Mazda engines” on the fourth anniversary of his “Alive Day.” During his second tour of combat duty, he was gravely injured after stepping on an IED on May 22, 2011 in Afghanistan. Since that time, he has gone through more than 50 surgeries, and – despite losing his left leg above the knee – is now a Mazda-backed race driver in the IMSA Continental Tire SportsCar Challenge series. He races with a custom-designed prosthetic that attaches to the clutch pedal and can be disconnected quickly for driver changes. After winning at Lime Rock Park last year on Memorial Day weekend, he won again in dramatic fashion with co-driver Andrew Carbonell on May 2 at Mazda Raceway Laguna Seca.

The Mazda Road to Indy Drivers in the Indianapolis 500
Twenty-three* of the 33 drivers in this year’s starting field at the Indianapolis 500 won championships or raced in the Mazda Road to Indy categories or a Mazda-powered open-wheel developmental series. (It’s 24 drivers if you count former Indy Lights champ Tristan Vautier, who qualified the No. 19 car for James Davison.)  *- this number could increase depending upon the replacement driver for James Hinchcliffe.

The Day Before the 500
The two other rungs of the Mazda Road to Indy will compete Saturday afternoon, May 23, on the 0.686-mile oval track at Lucas Oil Raceway in Indianapolis. The 70th annual Day (née: Night) Before the 500 will feature races for the Pro Mazda Championship Presented by Cooper Tires and the Cooper Tires USF2000 Championship Powered by Mazda.

Mazda Motorsports
Mazda Motorsports boasts the most comprehensive auto racing development ladder system of any auto manufacturer in the world. The Mazda Road to Indy includes USF2000, Pro Mazda and Indy Lights racing categories with Mazda power. In sports car racing, a similar ladder system involves a number of racing series, culminating with the Mazda Prototype team which races in the top level of IMSA sports car racing in North America. In grassroots categories, more Mazdas race on any given weekend in North America than any other manufacturer.

Mazda North American Operations is headquartered in Irvine, Calif., and oversees the sales, marketing, parts and customer service support of Mazda vehicles in the United States and Mexico through nearly 700 dealers.