Jack Harvey takes his first victory of 2015 at Indianapolis while Ed Jones retakes the points lead.

Winning his first race of 2015, Jack Harvey tightened up the Indy Lights Presented by Cooper Tires points at Indianapolis Motor Speedway in the first of two races on the famed circuit’s road course. But it was rookie Sean Rayhall, who won in only his fourth Indy Lights start, that was the talk of the weekend.

Harvey won the first race for seven-time championship-winning team Schmidt Peterson Motorsports with Curb-Agajanian in the Mazda Grand Prix of Indianapolis, while Rayhall showed signs of things to come with a second-place finish for 8Star Motorsports following a race-long battle with the Carlin pair of Ed Jones and Max Chilton on the 2.439-mile Indianapolis Grand Prix Circuit.

A distant seventh-place finish for Spencer Pigot (Juncos Racing) resulted in Jones regaining the series lead from Pigot by a one-point margin, 147-146, with Harvey only one additional point adrift in third. Schmidt Peterson, meanwhile, now holds a slender one-point lead over Carlin in the Team standings.

The only time Harvey was seriously challenged in the 30-lap race was under braking for Turn 1 on the opening lap, when teammate and fifth-place qualifier RC Enerson flew past on the outside line, only to slide wide onto the grass at the exit and drop all the way to 10th. Rayhall, who started third, took advantage of the ensuing confusion to slip past Jones into second, followed by Jones’s teammate Chilton and Scott Anderson (Schmidt-Peterson).

Harvey gradually inched clear at the front, leaving Rayhall to fend off the Carlin pair. Chilton did try once to make a move on Jones for third into Turn 1 on Lap 18, only to be firmly rebuffed.

In the second race of the Mazda Grand Prix of Indianapolis Presented by Cooper Tires, Rayhall scored an emotional and well-deserved victory. Rayhall, 20, from Winston, Ga., grasped the lead at the start of Round Seven of Indy Lights Presented by Cooper Tires and held on to win despite almost race-long pressure from yesterday’s winner and 2014 Indy Lights championship runner-up Jack Harvey.

Unfortunately for Harvey, a mechanical problem on the final lap dropped him to an unrepresentative fifth, allowing Schmidt Peterson Motorsports with Curb-Agajanian teammate RC Enerson and ex-Formula 1 racer Max Chilton (Carlin) to round out the podium.

Rayhall, the 2013 Cooper Tires Prototype Lites Powered by Mazda champion, made a perfect getaway from the outside of the front row and managed to draft his way pass polesitter Ed Jones (Carlin) before Turn 1. Behind, contact between Harvey and Jones sent the latter into a spin from which he was fortunate to emerge unscathed, albeit at the tail of the field. Several other contenders also were delayed. Felix Serralles (Belardi Auto Racing), meanwhile, emerged in third, from ninth on the grid, ahead of Kyle Kaiser (Juncos Racing).

An incident at Turn 1 on Lap Four ensured a full-course yellow and ended the day for erstwhile championship leader Spencer Pigot, whose disappointing weekend ended with his Juncos Racing MAZDASPEED Scholarship Dallara-Mazda beached in the gravel at Turn 3.

Rayhall again made good his escape at the restart, while Serralles managed to sneak past Harvey for second.

Hatrvey was trying to get the position back when a warning light in the cockpit went off due to rising engine temperatures. A helmet visor tear-off had become lodged in the engine intake. Rayhall managed to maintain his advantage at around one second until, cruelly, with less than half a lap remaining, the electronics in Harvey’s car cried enough and the engine went into “limp mode.”

The result enabled Jones to retake the championship points lead by 166-162 over Harvey, with Pigot trailing just seven points farther behind in third as the series prepares for its signature race of the season, the Freedom 100, on the 2.5-mile Indianapolis Motor Speedway oval on May 22 as part of the #MRTI FreedomFest weekend which leads up to the 99th Indianapolis 500. 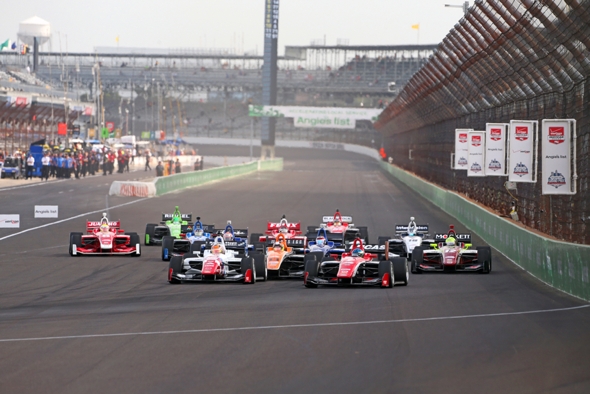