Some heat is good. Too much can start hurting the performance of both you and your car.

Racecars are hot.
No, we don’t mean in a metaphorical sense, nor are we saying they are attractive (although both can certainly be true – have you seen that Mazda SKYACTIV Prototype?). They are, literally, hot. Powered by explosions, stopped by friction … there are a lot of heat sources in a typical racecar, whether purpose built or production based. And while some heat is good for the engine, good for the brakes and certainly good for the tires, too much is, well, too much. You’ve got to get rid of it.

Marcus Shen has some pretty good experience in that arena. He’s the director of engineering for SpeedSource Race Engineering, which runs the aforementioned diesel-powered prototype in the TUDOR United SportsCar Championship for Mazda. Getting rid of heat been one of the major goals over the past year the team has been running the car, and doing so has gone a long way toward getting the car to its current performance level. So Shen knows a thing about keeping cooler, although he admits he has some fancy stuff to figure it our that most racers don’t have access to.

“Your typical racer may not have all the tools we would have to analyze and identify the actual heat loads that need to be rejected,” Shen explains. “So from a more grassroots perspective, airflow is important – air in, and also air out. There are big gains in efficiency for the radiator, not only getting air into the front of it, but also not stacking up the pressure on the backside of it. That has other effects on the car as well – aerodynamics and that sort of thing.”

Marcus cites the current crop of GT3 and GTLM racecars, most of which have radiators vented out the hood that helps airflow through the radiator and also adds some downforce. Chances are, though, that the rules for whatever class you’re racing don’t allow that sort of thing. what you can do, he says, is try to make all the air that’s going into it be the most effective it can be. Efficiency is the name of the game, and it starts with the radiator to manage the heat of the engine. 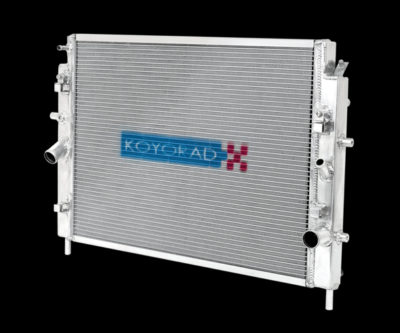 “More surface area would help if you can package it. But there’s a tradeoff, too; if you go too big, now you’ve got dead spots where you aren’t getting any airflow and now you’re just carrying weight for nothing and you’re hurting yourself,” he says. He adds that thicker is not necessarily better either, because the thicker the core is, the more resistance it has to flow the air. So bigger is not always better.

Bigger isn’t necessarily better, but better efficiency in a race car almost always is, and that’s true for airflow to the radiator as well.

“Get cleaner air up to it. One thing that’s pretty important is sealing up the air box on the front side. You might have a couple pieces of sheet metal that duct air to the radiator; sealing up those pieces is pretty important. Air is going to find the path of least resistance, so even the smallest leak at 120mph is going to be exposed. Then you’re just carrying the weight [of the ducting] around without much benefit,” Shen explains.

He recommends something like weatherstripping or foam adhesive tape for some compliance as things shift around. As always, your ability to do so within the rules depends on the class in which you’re racing.

Much of the philosophy that applies toward air into the radiator also applies to brake ducting. The objective is to keep the heat from gathering and boiling the fluid, so airflow is critical. In most cars and classes, there’s not a lot you can do to extract hot air out of that brakes, so getting cool air in is the only option. 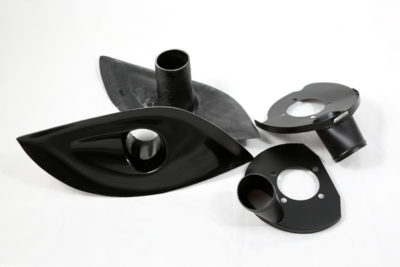 “Sizing helps. Going from a large opening and kind of funneling down to the hose will help. There will be some pressure benefits and, from a surface area perspective, trying to cram as much air into it, that will help you scoop up as much as you can,” he says.

He also has an important note for endurance racers – a bunch of debris crammed inside your brake ducts is going to hurt your braking toward the end of the race when you need it most. So some mesh covering the brake duct opening is a good idea; not only does it keep a lot of the debris from gathering in the first place, scraping it off the mesh is a lot easier during a pit stop than digging it out of the duct.

Finally Shen notes the variety of other tools available to the racer to manage heat, things like foil tape, 4-5 mil thick adhesive insulation material and exhaust shielding. The exhaust shielding will keep the heat traveling out the tailpipe rather than radiating into the engine compartment; foil tape or other methods can help keep the intake air cooler. Take a look at what some of the pros are doing and see if you think you can make it work for your car.

All these methods will go a long way toward keeping your race car from getting too hot, and keep you from losing your cool.