After watching their fellow competitors in the Southeast get started a week ago, the SCCA Western Conference Majors Tour raced for the first time in 2015, opening the year at Auto Club Speedway.

Seven race groups ran on the 21-turn, 2.8-mile circuit that uses both the infield road course and a large part of the oval superspeedway. Saturday’s races featured 30-minute races, while Sunday’s were scheduled for 18 laps or 40 minutes.

Formula Mazda stole the show in the first race after lunch on Saturday, with a four-car battle that looked like it would be more at home in Spec Miata than the “wings and things” group. Depending on the lap, any of the four cars – Larry Mason’s No. 12 Auto Diagnostics Formula Mazda, Jerry Dutch Schultz’ No. 44 Point B Real Estate FM, Brad Drew’s No. 78 Life+Gear Lighting FM, and Tazio Ottis’ No. 72 Patrick Ottis Company – could have taken the win.

At the end, though, it was down to Mason and Schultz for the win. The two went side by side at the end of the backstraight, with Schultz moving back into the lead. Rather than panicking, however, Mason collected himself and got a run through the final corners, pulling in front on the banking and taking his first career Majors win. How difficult was it? Mason’s heart rate monitor showed him at 178 beats per minute during the race.

After pulling in early on Saturday with only second gear in his transmission, defending Formula Mazda National Champion Mike Anderson pulled back into victory circle in the No. 1 HASA/Whiteflyer Formula Mazda on Sunday. With a full gear box, Anderson was virtually uncontested on his way to the win, setting a new track record in the process. 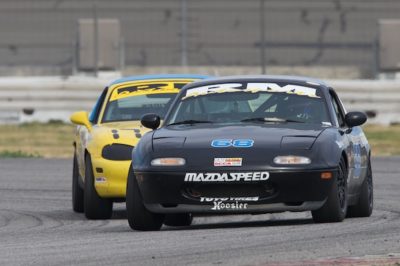 Spec Miata was a raging battle both days. On Saturday, it turned on the opening lap when a pile-up occurred on the first move off the banking into the infield, stacking up most of the field and spinning out several drivers. Elliott Skeer’s No. 17 Rush Motorsports Mazda Miata was one of the contacted cars, but he escaped and continued without slowing much. It was a fortunate move for Skeer, too, as he followed Clement Lee’s No. 68 RM Autosport Miata and Francis Hu’s No. 25 Perfomance Composites Miata as they broke away from the field. The order remained unchanged for nearly the entire race, each content to extend the gap until the white flag.

At that point, Skeer struck. He moved around Hu near the exact location of the lap one incident, and then chased Lee to the end of the backstraight. The pair went side by side through the corner, with Skeer emerging in front and racing to the checkered flag for the win.

On Sunday, Skeer was drafting Lee for the entire race, but once again led the only lap that mattered, the final one. He stalked Lee for 17 laps, occasionally peeking out on the back straight; but it wasn’t until the final lap that he made his move. Lee kept Skeer from going around him coming off of the banking, but then the pair ran side by side for three corners before Skeer found himself on the inside and then into the lead. Once in front, Skeer charged to the finish, leaving Lee with two second-place trophies despite leading nearly every lap of the weekend.

Aaron Downey opened the E Production season in the Western Conference with a 19-second E Production win in the No. 5 Roundpeg.com/Mazda Mazda RX-3, out in front of Gary Gist’s No. 50 K&G Racing Mazda RX-7. He repeated the feat on Sunday.

Tom Wickersham Managed to score two victories in the same day on Saturday, taking Touring 4 in his RX-8 and then driving his No. 01 Main Straight Racing MX-5 to the win in GT-Lite. He raced the RX-8 in GT-Lite on Sunday, but fell short of the win.