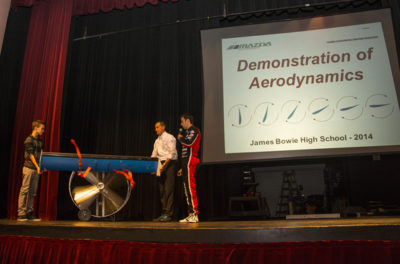 September 19, 2014 (AUSTIN, Tex.) – It’s back-to-school time for school kids across the county and the acclaimed R.A.C.E. STEM (Science, Technology, Engineering, Math) education outreach program is back in action. Launched by Mazda in January, the Racing Accelerates Creative Education (R.A.C.E.) outreach program has now positively impacted more than 10,000 middle and high school students. To date, there have been 22 interactive presentations at 12 schools local to the TUDOR United SportsCar Championship events.

“This STEM program has been one of the most rewarding things we’ve done at Mazda Motorsports,” enthused John Doonan, Director, Mazda Motorsports and driving force behind Mazda’s R.A.C.E. STEM initiative. “We’re happy to report that our future is in good hands as the students that we’ve been fortunate enough to interact with are demonstrating the drive, initiative and curiosity that it takes to convert STEM education into global innovation.”

Earlier this week over 1,400 students from James Bowie High School and Akins High School in Austin experienced Mazda’s STEM presentation. Thanks to the STEM advocates and leadership team at Circuit of the Americas, each student was given a free race ticket for this weekend’s race.

“Through the track promoter ticket giveaways, we’ve been able to bring students to the race events and take them behind the curtain to show how Mazda uses STEM in every aspect of our racing and engineering programs,” explained Joel Miller, Mazda factory driver, race team degreed engineer, and Mazda’s featured speaker at the schools. “We’re grateful to those promoters that have supported the program, because together, we’ve created not only new sports car racing fans, but we’ve made the connection between the classroom and the careers in motorsports. It’s fantastic.”

Mazda’s 2014 STEM campaign will close out with two more presentations in advance of the Road Atlanta Petit Le Mans race. Both will be held at Collins Hill High School in Suwanee, Ga. on September 30. Plans for the 2015 R.A.C.E. STEM schedule are underway.