SpeedSource and its innovative Mazda diesels hope to make an impression at COTA and Road Atlanta. 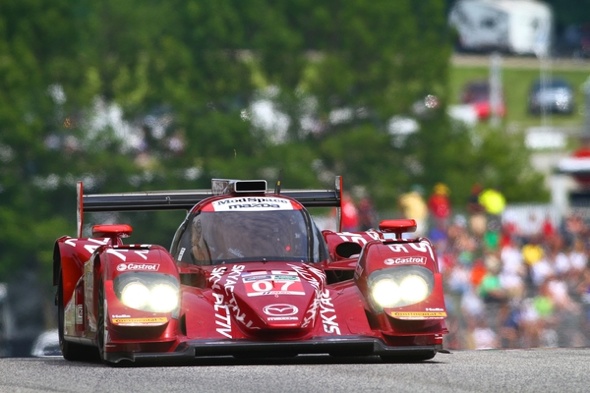 As the TUDOR United SportsCar Championship heads into its final races, the SpeedSource Race Engineering team and its Mazda SKYACTIV Diesel Prototypes have only a couple more occasions to show the progress the team has made with the cars this season. Fortunately they are very good chances, and the progress has been significant.

From misfortune rises opportunity. While the team suffered a setback at Road America with a huge crash for the No. 70 in qualifying, it also provided occasion to go through the car completely.

“Some teams would be content to just rebuild the car. Our team is not,” says SpeedSource principal Sylvain Tremblay. “We’re making the car better. We’re taking the time to take it down to the bare tub and rebuild the entire package, look at every single zip tie, every wire, every nut to try to reduce weight and make it more efficient. We’re using a SKYACTIV mentality in the rebuild of this car to look at every single aspect of it and try to make it a better package.”

The improvement in the two prototypes, the No. 70 driven primarily by Tremblay and Tom Long and the No. 07 driven primarily by Joel Miller and Tristan Nunez, is significant since their competition debut at the Rolex 24 at Daytona. At Road America, the car was very competitive – perhaps surprising given the long straightaways and the power output of the SKYACTIV 2.2-liter, twin-turbo, four-cylinder diesel engine. Before the final yellow, the No. 07 was running fourth thanks to its fuel economy. But while the team has made huge strides with the engine, it hasn’t forgotten about the rest of the package.

“The chassis has made the biggest gains since the mid-part of the season. All of the simulations we do in-house and our chassis development partner Multimatic does, we unload the cars, they’re very fast, they handle great. The only segment we seem to be down by a substantial amount are the straightaways. But everywhere else, from braking to high-speed to low-speed to mid-speed corners, we almost overlay if not surpass our competitors. I am really proud of the effort. Even though we’re working on the engine, we have not forgotten the importance of the chassis. It is a package, which truly is the SKYACTIV mentality – you have to look at every aspect of the car and see what percentage you can improve on all of the matrices that you look at to try to get a better lap time,” Tremblay says.

The chassis was proven before SpeedSource got its hands on it. But tuning it to the team’s particular application with the Mazda SKYACTIV Diesel engine has been tricky. The team is trying to tune it to make opportunity with the diesel’s inherent advantages.

Tremblay says the smooth surface of Circuit of the America’s Formula 1 track, where the TUDOR Championship races this weekend, could play in Mazda’s favor. But it’s the endurance race of Petit Le Mans at Road Atlanta in two weeks that especially has him excited.

“It suits our mentality, what we’re trying to do,” he says. “At Road America we were scratching at a podium on performance and fuel economy. The longer races kind of suits our nature more. If it stays green for a long time, we can really extract the advantages that our extremely efficient 2.2-liter SKYACTIV Diesel package has.”

The Circuit of the Americas race airs at 12:30 Eastern on Fox Sports 2, but you can get an insider’s view of the race from one of the SKYACTIV Prototypes because Mazda will broadcast live from one of the cars on its YouTube channel. You can find the stream here.