Matthew Pombo, winner of both qualifying races, led the 34-car field to the green for the Championship race in his No. 60 Mazda Miata. At the drop of the green, Danny Steyn was able to get a run on Pombo at the exit of Turn 1 and lead the first lap in his No. 39 Miata. By lap four, the No. 57 driven by Alex Bolanos joined the front pack. On lap seven, Bolanos moved by Pombo into second and two laps later drove to the overall lead.

The race was far from over when Bolanos took the lead, though. On lap 12 Bolanos was relegated to third with Steyn back in front and Pombo in second, the trio circulating bumper to bumper. By lap 13 the three combatants had amassed a three-second margin to the fourth-place runner. On lap 14 Steyn was able to get some separation as Pombo and Bolanos were running side by side. James Drago in the No. 2 Miata moved into third position on lap 16 as Pombo began to fade.

Pombo reported that midway through the race, he lost power and had to shut the car off and restart it three or four times during the race. So by lap 18 it was a two-car race between Steyn and Bolanos, who swapped positions over the last couple of laps. At the checker it was Bolanos, Steyn and Pombo for the Spec Miata Championship podium.

In Performance Touring E, Ben Anderson came out on top in his second-generation RX-7. 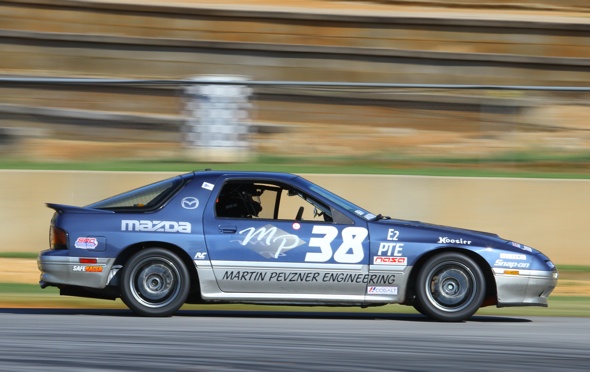