Concentrating on a few key elements will help you be faster, says six-time champ Bartek Borowski.

The key to a successful autocross run starts well before a driver pulls his car up to the starting line. Anybody who’s been to at least one autocross knows that the course walk is important. Because the course changes with every event, it’s the only way to know where the course goes before you have to start putting down times.

The SCCA Solo Nationals take place next week at Lincoln, Neb., Airpark. Most of the competitors will log more course miles on foot than they will in the car, walking each of the two courses multiple times. As important as it is to familiarize oneself with the course, more critical is figuring out how to go fast on it. In other words, according to Bartek Borowski, it’s quality over quantity.

“The way I approach it is to do one or two walks to get a general feel, then do one concentrating on the marks you want to hit,” he says.

Borowski seems to know what he’s talking about. He’s won E Stock at the Solo Nationals in a Miata four years running, has six titles total and was also the 2012 E Stock champ in ProSolo. This year he’ll be competing in E Street R, what is essentially the old E Stock class on R-compound tires.

“I would start by breaking up the course into the big elements and try to identify the important ones – places where one can lose a lot of time,” he explains. “Slaloms, for example…generally speaking, they’ll be about the same. So what happens in the middle of the slalom, typically, is very similar. But it would be important to know how you’re getting into that slalom and getting out of that slalom. Is there anything to be gained or lost at either end of it?”

He says that it’s a good idea to pick three or four areas in a course to make a priority, places where there is an obvious time benefit to be found or a big penalty if you do it incorrectly. Then look at the maneuvers before and after to link them together.

“One of the most obvious areas is optional slaloms. You want to know if there’s a benefit to going left or right. Some other things could be hard corners after the slalom – does it make sense to slow down toward the end of the slalom or carry speed and accelerate all the way through the slalom? If there’s a corner that’s going to come up rather quickly afterward, it may make sense to slow down in the middle and not charge all the way through. Sometimes the last cone of the slalom could become your entry point to the next maneuver. So there’s one area where you could gain a lot of time. Same thing goes for turnarounds and big, sweeping corners. Some of them, you can really open up the corner if it helps you on the entry to the next maneuver. Other times, going wide really screws you up for the next maneuver,” he notes.

The other thing to look for is the surface itself. Does it slope? If you’re going downhill into an off-camber corner, that’s going to affect your entry speed into the corner. Conversely it may be uphill and cambered in your favor, and therefore you can carry more speed. Slopes and valleys will also affect how rainwater flows off of or gathers on the course – all useful bits of information.

It’s worth not only thinking about how  you walk the course, but when as well. Ideally, you’d like to walk as close to the time that you’re running as possible. If you’re running in the afternoon of a multi-day event like the Solo Nationals, walk after runs are finished on the previous day. Doing that, or walking during the lunch break, will also let you see where the marbles and dust gather, and where the clean line is.

A driver typically only gets three shots at a course in an autocross event. Figuring things out during your first and second runs doesn’t leave any room for error during your third attack. Better to do it before you pull up to the line in the first place.

“Three or four elements is really all that you can focus on and memorize and implant in your brain,” Borowski concludes. “Where do you want to have the car when you’re running? Where do you need to be looking when you are going through a maneuver? That’s what I look for in a course walk.” 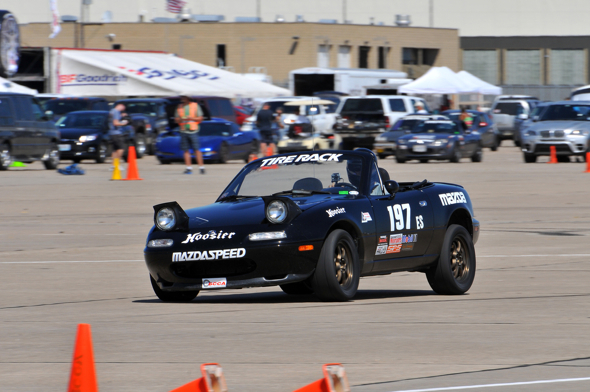