As the Indy Lights Presented by Cooper Tires drivers took to the track at Sonoma Raceway for the second of two races in the final weekend of 2014, title rivals Gabby Chaves and Jack Harvey were separated by just a dozen points after 13 races. Harvey had already won the previous day’s race, and Chaves needed to finish second if he was going to take the title if Harvey did it again.

Well, Harvey swept to another emphatic victory for Schmidt Peterson Motorsport with Curb-Agajanian. The Englishman had done all he could in the No. 42 Racing Steps Foundation Dallara. His fourth race win of the season tied him on championship points and race wins with series leader Chaves (Belardi Auto Racing), but it was the Colombian-American who would take home the championship crown – and a $750,000 Mazda Road to Indy Scholarship to assist with the advancement to next year’s Verizon IndyCar Series – by virtue of his tally of five second-place finishes to Harvey’s one.

Just as on the previous road course event at Mid-Ohio Sports Car Course, Harvey was effectively in a class of his own on the undulating and challenging 2.385-mile natural-terrain road course. The 21-year-old from Lincoln, England, started from the pole for the second day running and his only moments of concern came even before the green flag fell when the first two attempts at a start were waved off due to a misalignment of the field. Harvey was adjudged to have anticipated the first attempt, while Chaves was at fault at the next go-round. Thankfully, the third time worked a charm.

Harvey took advantage of his pole position to assume the lead heading up the hill, while Chaves slotted neatly into second. A fine start by Colombian Juan Piedrahita enabled him to jump fellow second-row starter and teammate Luiz Razia for third, while the third title contender, Zach Veach, somehow managed to work his way from eighth to fourth.

So far as the front of the field was concerned, that was about it. Harvey made an immediate break, setting what was to stand as the fastest lap of the race (worth one championship point) on Lap 6, then pulled away with every single lap. He ultimately finished a full 18.7018 seconds clear of Chaves, who nevertheless had achieved his goal. Second place was all he needed to clinch the championship.

Piedrahita held off a long train of cars for the majority of the race before making a couple of mistakes under braking for the Turn 9 chicane and sliding across the dirt. The second one cost him dearly, as both Veach and Razia had made their way past before Turn 11.

Veach held onto third in the face of intense race-long pressure from Razia, while Matthew Brabham finished fifth in the second Andretti Autosport entry.

Harvey’s victory and Razia’s fourth-place finish was enough to clinch the Team Championship for Schmidt Peterson Motorsports with Curb-Agajanian. 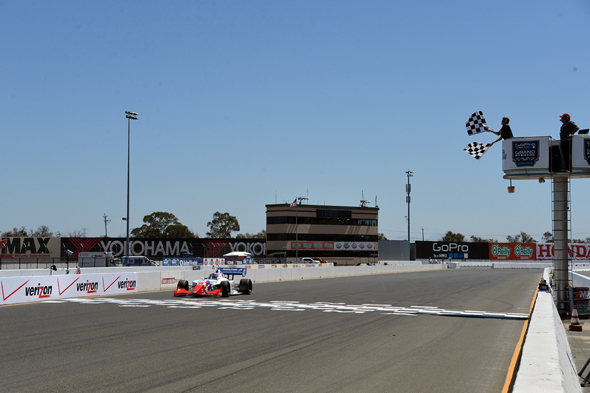