The number of racers who have raced, and won, at Indianapolis Motor Speedway is small. While America’s most famous track has expanded its races and thus provided the opportunity for many more than a single individual per year to add their names to that roster, it’s still a bit of an exclusive club. Sylvain Tremblay and Tom Long are members of that club, having won the GX class in the Mazda6 SKYACTIV-D Clean Diesel in last year’s Grand-Am Rolex Series race at the Brickyard.

Returning to the hallowed venue with the Mazda SKYACTIV Diesel Prototype for this weekend’s TUDOR United Sports Car Championship, Long reflects on the allure of Indianapolis Motor Speedway and the progress the SpeedSource team has made with the car so far in its first season.

“Growing up as a race fan, the Indy 500 and what Indianapolis Motor Speedway means to auto racing, especially in the U.S. but also across the world for that matter…. Remembering the first time I was able to go there to watch the Formula 1 race with my dad, and how exhilarating it was being on the IMS grounds and watching the race,” he says. “Being able to participate in a race on that track is an incredible feeling; just the perspective you have driving the track is very different.

While Long says he thinks the revised layout for the IMS road course may suit the P2 cars a little better, it’s unlikely he’ll get a chance to repeat that, although the team is coming off its best finish yet, a sixth at Canadian Tire Motorsports Park for the No. 07 sister car to Tremblay’s and Long’s No. 70. Still, Long is pleased with the progress he’s seen in the car’s initial development year.

“We’re really at an exciting point of the season in the progress of the SKYACTIV Diesel Prototype. The team itself is really ticking, working as hard as they ever have, keeping the cars pushing forward and being more and more competitive. We’re really excited about what the rest of the season has for us,” he says.

Long says they have made improvements every single race. Having two cars means they can try two different approaches to a problem in the same race. The team continues to work on the whole package, and can do so in large part because the reliability is in place.

“Over the course of the last few races, we’re able to go many, many sessions – say all through practice – just focusing on chassis development,” Long explains. “That is something that comes later in the program when you have your engine program sorted out. That’s what’s so neat about this is we’re actually at that point. We understand we need to continue working on cooling to get more power output out of the engine. We understand that and we’re working on that. But just having a reliable SKYACTIV Diesel package so that we can improve the chassis has been great. That’s why we’re starting to see the best results we’ve had all year.”

Mazda will be streaming live video from one of the Mazda SKYACTIV Diesel Prototypes during the Brickyard Grand Prix. Find it at here. The race kicks off at 5:45 p.m. Eastern today. 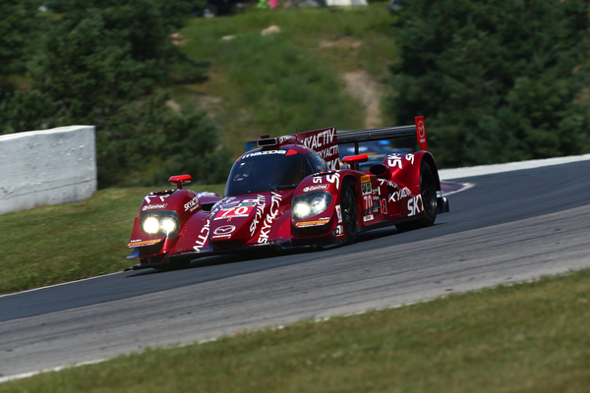