The 19 year old from Carlsbad, California will replace the injured Marc Miller alongside Tyler McQuarrie in the #3 CJ Wilson Mazda MX-5. Miller will be fully recovered in time for the Lime Rock Park event at the end of May, so this is a brief opportunity for Skeer to display the skills that he has honed over the last two seasons racing for CJWR in the Mazda MX-5 Cup.

Skeer and McQuarrie recently shook down the #3 car after its complete rebuild following Millers heavy crash at Sebring International Raceway last month. After Sebring, we took a long, hard look at the #3 CJ Wilson Mazda and decided to repair rather than replace the chassis, explained Team Manager, Andris Laivins. According to Laivins, getting the car back on track was remarkable team effort. Marc took a very hard hit, but thankfully the car is still structurally sound and straight. 100% of the credit goes to Derek, Zac, and Kathryn at the shop who have put hundreds of hours into making the #3 new again. 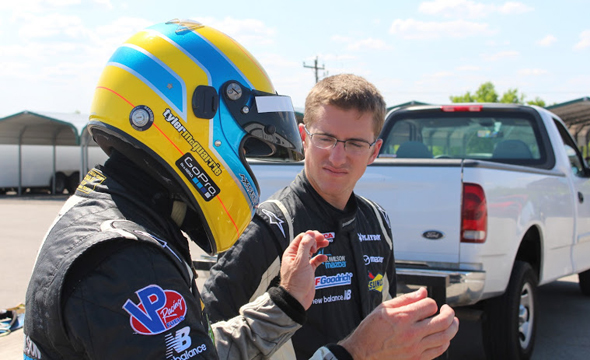 Skeer was suitably impressed by his first experience of the ST Class MX-5. The car does feel like the MX-5 Cup car that I have raced, just with a lot more in every category. More power, better brakes, and a lot more corner grip! The first time I hit the brakes I went “Wow! This thing can stop!” but as soon as I turned the wheel I realized I didn’t need the brakes! It will be a fun car to race and it is an awesome way to get my first experience of the Continental Tire Series. It has shown to be a quick car, so hopefully I can get to it’s limits and battle for a good finish!

Team owner, CJ Wilson has naturally mixed feelings about Skeers upcoming debut. Although we wish it was under different circumstances, we feel like this could possibly be the best overall scenario for Elliotts first Continental Tire Sports Car Challenge start. He has raced and won at Mazda Raceway using the MX-5 platform, so he will know where the speed is to be found. Wilson is very confident about the teams chances on the Monterey peninsula, Elliott deserves this chance and Tyler [McQuarrie] will be a great coach and team mate for him while Chad and Stevan will be competitive as always. Mazda Raceway is an event that every member of the team looks forward to each year – the track is legendary and the surroundings are idyllic. CJWR is very excited to get back on track!

Skeers first chance to sample Mazda Raceway Laguna Seca in the ST class MX-5 will be at the test day on Thursday, May 1st. The third round of the Continental Tire Sports Car Challenge will take place on Saturday May 3rd at 12:45 PST.