Much of the country is still digging out from tough winter weather, with more likely to come before spring arrives. So it’s no wonder that many SCCA Club Racers head to Florida in January for some warm sunshine and a jump on the racing season, many coming from as far away as Canada for the first Majors races of the year.

The season officially kicked off on Jan. 4-5 at Sebring International Raceway for the Sebring Super Tour, Rounds 1 and 2 of the Eastern Conference Majors Tour. The doubleheader featured 30-minute sprint races on Saturday and 15-lap or 40-minute, whichever comes first, races on Sunday.

Craig Berry led 71 Spec Miatas to the green flag on Saturday, then dared the entire field to keep pace with him his No. 20 Granite Remnant Mazda Miata at the front of the field.

Berry started in front with a familiar dance partner, the No. 2 East Street Racing Miata of Jim Drago. By lap five, Drago had been shuffled back, and the No. 57 Momo/Apex Alignment Miata of Alex Bolanos and the No. 8 Cahall/Driver Coaching/Hawk Miata of Todd Lamb were challenging for the lead. Lamb’s brake lights came on quickly just past the start/finish line as his day essentially ended, leaving Bolanos as the lone true contender with Berry.

Bolanos moved in front on lap seven, with 12 minutes to go in the race. Berry stayed in second until lap 10, when the eventual winner regained the lead for good. The two were close again at the mid-point of the final corner, but Berry’s run through the exit to the checkered flag was enough to win. Selin Rollin’s No. 87 Apex Alignment Mazda Miata held off Justin Hille’s No. 48 Hilltrux Tank Lines Miata for third place in a tooth-and-nail battle of their own.

Bolanos got his redemption on Sunday, taking the Spec Miata win. He was declared the winner after a protest determined the final lap on the track began as the 40-minute time limit was exhausted, shuffling the official order back to as it ran a lap prior and negating what was a thrilling final lap of action.

Of the Mazda-powered drivers that came away from Sebring as winners, Berry and Bolanos were the only ones to walk away with a single victory. Six others repeated Saturday wins on Sunday.

Among those was Drago, who scored two first-place finishes in Super Touring Lite in his No. 2 East Street Racing Miata. Not only did he get the double victory, but also his fast lap of 2:30.419 set a new mark for the class at Sebring.

Jacek Mucha was also a double winner in the class formerly known as C Sports Racing, now christened Prototype 1. Mucha was the class of the field on both days in his HMS 016 cp/Mazda. Glen Bocchino brought out one of his former Grand-Am Continental Tire Street Tuner MAZDASPEED3s to claim a pair of victories in Super Touring Under.

Todd Lamb, driver of the No. 8 Cahall/Driver Coaching/Hawk Miata, was selected for the weekend’s GoPro Hero Move of the Race for his performance on Sunday in Spec Miata.

A week later it was Palm Beach International Raceway’s turn to host Rounds 3 and 4. It was the first time that a Majors event had visited the track, but the circuit provided plenty of excitement

In F Production, Mark Weber’s No. 25 Goodyear/Redline Mazda Miata and Gary Johnson’s Midget were locked in a back-and-forth battle for second place that became a battle for the lead when Ken Kannard fell out of the lead and the race with a broken header. Johnson took the lead on lap 10, but Weber motored past again down the backstraight to take the lead for good on lap 12.

Alex Bolanos took his second consecutive Spec Miata race win following race two at Sebring, this time leaving no doubt after crossing the stripe 1.239s ahead of Forrest Landy for the race win. Bolanos’ No. 57 Momo Mazda Miata battled with the No. 39 Adept Studios Miata of Danny Steyn early, but by lap seven Bolanos held a lead he wouldn’t relinquish.

Steyn fell behind Landy’s No. 49 Excitations.com Miata on lap 11 of the eventual 19-lap race, then fell off the podium behind Selin Rollan’s No. 87 Apex Alignment Miata on lap 17. Steyn still turned the fastest lap of the race in 1:34.002.

Bolanos won again on Sunday for his third win in Florida. 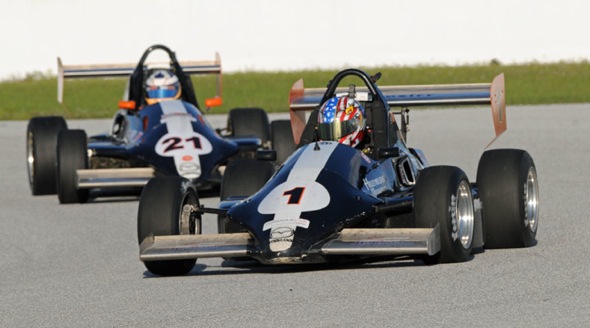 Defending Formula Mazda National Champion Darryl Wills’ No. 1 Hillenburg Motorsports Formula Mazda and Stuart Rettie’s nearly identical No. 21 Hillenburg Motorsports machine mirrored each other through the race, each waiting for the other to make a mistake. Neither did, with Wills crossing the stripe just a car length ahead. Rettie got the bragging rights with the fast lap, turning a 1:20.233.

It was Wills’ third win in Florida, and he completed the Sweep on Sunday. He was joined by Jacek Mucha, who swept Prototype 1 in the first four rounds by scoring the double in Palm Beach, and Glenn Bocchino, who claimed four Super Touring Under victories.

The next SCCA Majors event will be Jan. 17-19 at Auto Club Speedway in Fontana, Calif, part of the Western Conference. The Eastern Conference resumes in March at Road Atlanta.