History has shown that, even with a given set of rules, there is no one right way to build a racecar. With enough latitude, designers will find unique solutions to solve a common problem. Witness things like six-wheeled Tyrell F1 cars, turbine-powered Indy cars or even diesel-powered sports cars.

In SCCA’s Production category, a common approach is to stuff as much tire under the fender as possible, and the rules allow the fenders to be flared to cover wider rubber. Eric Prill, in building his F Production 1.6-liter first-generation Miata with Jesse Prather, took a slightly different approach.

“In 2010, I talked to Jesse Prather about building the next generation of F Production Miata,” says Prill. “He had been involved in many of the very fast cars, and the only cars that have won the Runoffs in F Production. So we sat down and started thinking about it and I really wanted to build an aero car to the radials that were new and just coming out, so I could use stock bodywork. They were coming out with a 13-inch radial at the time, but they didn’t have it yet. I took a leap of faith and designed the car around a 13-inch radial to get the center of gravity low and keep the car narrow, knowing that at Road America, getting down the straightaways was so critical. So this car was built to be low and narrow to get through the air well, and we believe we’ve accomplished that.”

Road America, home to the National Championship Runoffs for the past five years, is a four-mile circuit with long straights. Prill’s lap speed for his best qualifying lap was almost 94mph, so aerodynamics are pretty critical. The bodywork, from the front bumper to the rear, is all stock, although the front fenders are slightly flared and Prill put an air dam on the front. 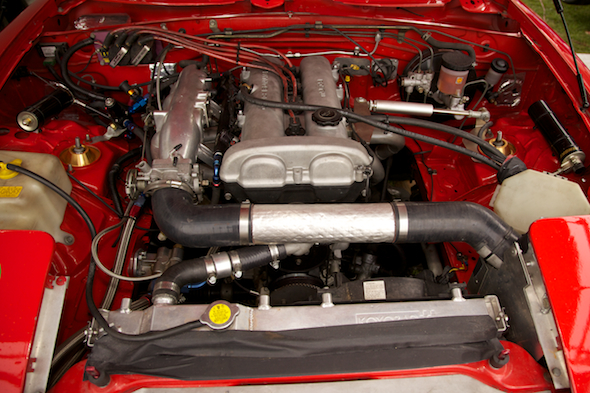 Prill runs Penske shocks and a PBS gearbox. A rule that came about as he was building the car allowed him to use the stock fuel tank instead of a fuel cell. “Probably the best place to put a fuel cell is the passenger side, but I felt as you go through a run and burn fuel off, I didn’t want it affecting crossweight on the car. The fuel tank on this car is actually in a pretty good location. It’s a little higher than you’d put a cell, but it’s smack dab in the middle of the car, so as you burn fuel off, it won’t change your crossweight,” he says.

Prill has found some challenges with running the 13-inch wheels and tires. He says brake cooling has been tricky because the wheels don’t vent very well. He also has to run the hammer-on weights instead of stick-ons to balance the wheels. But those have proven small issues, minor inconveniences to have the fastest F Production Miata at the Runoffs. He finished second with the car in 2013 after qualifying third. Perhaps almost as important is his comfort driving the car at the limit, which Prill says he has in abundance compared to his former racer, a Lotus Super Seven. 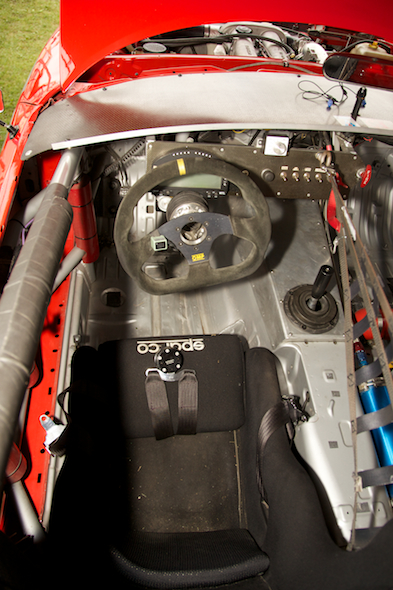