Endurance races used to be about which car was the most reliable and, when a car broke, how quickly it could be repaired. Now to win a race like the Rolex 24 at Daytona, the 12 Hours of Sebring or the 25 Hours of Thunderhill, it’s more an exercise in speed; the races may be longer, but they are still, in many ways, sprints.

So now races are often won or lost on strategy – coming into the pits for fuel, tires and driver changes at the right time, and spending as little time in the box as possible. For SpeedSource’s David Haskell, strategist for the No. 70 Castrol Mazda6 SKYACTIV-D Clean Diesel in Grand-Am GX competition in 2013, strategy doesn’t really come into play until the race starts winding down.

“The strategy is to run full loads of fuel, keep the driver comfortable in the car so they don’t make mistakes – they’re going to be out there for a long time – and maybe do double stints on the tires to save some pit time,” Haskell says of the first half or three-quarters of the race.

“I don’t start thinking about the end of the race until five or six hours before the end,” he explains. “In the shorter races – two, three or even six hours like at Watkins Glen – I’m always working it backward, so you’re always trying to get to a point where you’re making your last pit stop and you’re done. You know what kind of fuel economy your car gets, I know what the fuel tank capacity is, I know how long we can go. So it’s always get to that point in the race, backward. If a yellow falls there, beautiful.”

That’s Haskell’s plan. The trick to this whole thing is competitors may have other ideas. If your team pits and they don’t or vice-versa, it can leave a strategist second-guessing himself.

“For me it’s frustrating as a strategist because I don’t know exactly what’s going to happen at that point. You can only do what you’re doing with your car, and hope people react the way you do.”

Haskell has one advantage on his side that other teams don’t – the SKYACTIV-D Clean Diesel engine. Most of the competitors have to pit before the Mazda6s do, so the team can base their move off what other teams are doing, instead of the other way around.

Haskell also has some tools at his disposal that most club endurance racers don’t, and that’s boatloads of information from data on the car. But almost everyone has access to a computer with spreadsheet software, and that’s one of Haskell’s best tools.

“We make notes as we go down. We have a spreadsheet of the whole race – if we pit here, how long it is here, how many minutes to the end, all that stuff. So it’s not that complicated. You have to take a lot of notes,” he says. “You also have to know about wave-bys, pacecar location, where it is on the track relative to you – where we are compared to the pacecar, where’s the leader?”

In the end, though, sometimes it just comes down to following a hunch and getting lucky by making the right call. Haskell’s experience makes his hunches generally more valid, but sometimes it’s still just following a feeling that makes the difference between winning and losing.

“It’s not the worst you can do, but sometimes you have to guess at stuff,” he says. “I try to make the best decision with what I have at that moment. That doesn’t mean that in two minutes it’s not going to change. But all you can do is work with what you have at that point. We get lucky once in a while, and luck is definitely part of racing.” 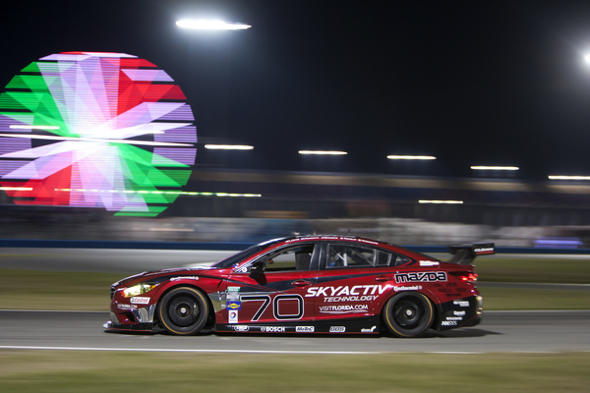