From single seaters to sports cars, at club races across the country, there are plenty of Mazdas filling the fields.

Across the SCCA, NASA and even vintage racing landscape, more grassroots racers sit behind the wheel of Mazda than any other brand. That’s not just because Mazda’s are competitive in their respective classes, but also because we do more to help racers race. 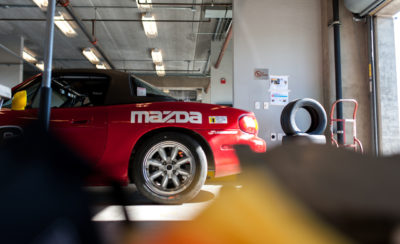 With many sanctioning bodies and race classes to choose between, Mazda Motorsports offers club racers comprehensive support, including parts, tech, and contingency awards (prize money & scholarships). Whether you’re interested in sprint racing, endurance racing, or a combo, there are many club racing options in which Mazda will support you. If you haven’t signed up for the Mazda Team Support Program, it should be your first step.

2022 marks the 17th year for the MX-5 Cup Shootout and scholarships; since 2020, Mazda has offered three scholarship per year, with the top award valued at $110,000 – the largest in club racing, as well as two others, each valued at $75,000. The expansion in number of the scholarships helps Mazda to guarantee one woman to earn a scholarship.

This one-of-a-kind, post-season Shootout, aids these three drivers to compete in the Idemitsu Mazda MX-5 Cup presented by BFGoodrich® Tires each year, a professional racing series in IMSA.

Championship winning club racers competing in a Mazda who win an SCCA Runoffs National Championship, NASA Championship, NASA's Teen Mazda Challenge region, SCCA' First Gear Mazda Challenge region, or Spec MX-5 Challenge national championship, automatically earn nominations to the MX-5 Cup Shootout. Recognizing that talented and deserving drivers may not always be in a position to win a championship, Mazda may select other racers as at-large nominees. These nominees - fewer than 30 combined - have the opportunity to submit a business plan, video and resume to then be selected as finalists who compete in a two-day shootout. For those who make it as a finalist to compete at the Shootout, they should expect a test of on- and off-track skills: interviews to learn more about the finalists’ off-track business prowess, vehicle dynamics and more, as well as their abilities behind the wheel of the Mazda MX-5 Cup race car.

The Mazda Employee Pricing S-Plan is offered by Mazda North American Operations to provide those individuals affiliated with Mazda products and services with the opportunity to purchase or lease a new Mazda vehicle with a no-hassle, set price at a significant savings versus the Manufacturer’s Suggested Retail Price. Mazda Motorsports members can generate an S-Plan pin by www.MazdaUSA.com/Splan and entering your partner ID from the SCCA or other sanctioning bodies. Mazda Team Support Program members may call Mazda Motorsports at 800.435.2508 to request one to be generated and emailed. Take your printed certificate to your local participating Mazda Dealer to receive exclusive pricing on the new vehicle of your choice.